Like Hootsuite, TweetDeck allows you to schedule posts in advance. You can also manage multiple Twitter accounts from one place, without having to sign in and out of your various accounts.

In addition, TweetDeck offers some great organization features. For example, you can organize information into columns, be it a search query, a certain key term or hashtag you're following, or mentions of your company. It's a great way to stay on top of things. (See the "Helpful Video" below for more details.) 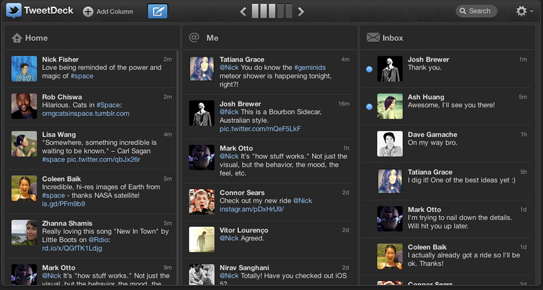 TweetDeck also has a global filtering system, wherein you can weed out unwanted posts or other information you're not interested in. So, for example, if you're tired of seeing posts about Justin Beiber, you can apply a filter in just a few simple clicks. Then, going forward, TweetDeck will ignore any posts containing his name. They simply won't appear.

Like Hootsuite, TweetDeck is FREE. You can either download the program version for your PC or MAC. Or, you can use the online version if you utilize the Chrome or Safari browsers. (Versions for Firefox and Internet Explorer are in the works.) There are also mobile versions for your Android or iPhone.

In short, if you're serious about using Twitter, give TweetDeck some careful consideration. It's a powerful tool, and more user-friendly than it looks!

*I'm not a follower of the maker of this video. But this is a really great tutorial - especially if you're new to Twitter.

Getting Started with TweetDeck (official page)