The IT Industry: A Lady in a Man's World

Seems like an obvious statement, right? Yet I tend to forget that I'm a female in a male-dominated industry. Mostly because I can hold my own, as I'm accustomed to challenging situations. I also happen to get along better with men than women. And I can Tweet about Star Trek, Lord of the Rings, and superheroes with the best of 'em. (As I enjoy those things!)

This past week, however, several incidents have reminded me of (a) the unique position that I hold, and (b) the challenges even ladies like myself must face on a daily basis.

I. See Yourself as A Valuable Asset

The first Tweet really punched me in the gut for two reasons.

First, ladies (overall) are hardwired to be supportive and helpful. We'll jump in to help without a second thought. Inherently, there's nothing wrong with that. But in the professional sector, especially in a male-dominated industry, we can (albeit unintentionally) let that trait come back to bite us.

How? By letting it interfere with the fact that we need to see ourselves first and foremost as assets - and valuable ones at that. In other words, we have legit skills, talents, and experience that a plethora of employers or clients need at any given moment. Thus, we should act accordingly. (Such as charging what we're worth and not feeling guilty about it.)

Second, let's be honest. Working in a male-dominated industry can be intimidating - especially if you work alongside a guy or two who projects an intense wall of confidence and competence. Consequently, we can tend to feel smaller and "so grateful to be here." (Especially when you're already in the minority.) This can even lead to a passive mindset, wherein we wait for things to happen to or for us, versus making key moves ourselves. 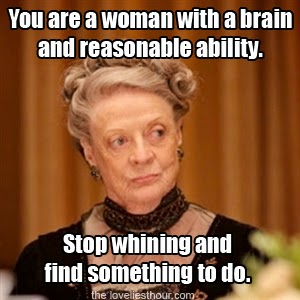 The truth is, though, that all of us (both men and women) are on the same playing field - especially in the tech industry. The industry, by nature, is always in a constant state of flux; everyone is always learning. Chances are Mr. Confident in the cube next to you is Googling solutions to the same six problems you are - he's just not being as open about it.

Remember - you have the skills, the experience, and the ability. You're a valuable asset - just as valuable as all the guys around you. And by all means, still be a helpful and supportive lady. Just use wisdom and caution on a daily basis to ensure that wonderful trait isn't damaging your career.


II. Understand that Being the Minority Can Be Awesome


Sometimes, being the minority helps you stand out in a positive way.

Earlier this week I was sitting in a meeting with a male IT employee and a male IT manager (both of whom are an entire level above me on the totem pole). We were discussing Ektron, the CMS our county uses for its website.

During the conversation, the IT manager said something to me that struck a real chord. His comment was something akin to, "Only X number of people know Ektron - and a very small percentage of those are women."

Since I don't tend to see myself as female to everyone else's male, the comment jolted me. All of the sudden I thought, "Wow. He's absolutely right. I plan on knowing Ektron inside and out. How many ladies will be able to say that?" (It also made me that much more grateful for the warm welcome I've received from the Ektron male employees - and their peeps - that I've come to know. They've never been anything but gracious, fun, respectful, and helpful. Not that I've ever had a reason to expect otherwise!)

But back to my point, which is...see being a minority as glass half-full. See it as an advantage versus a disadvantage. Always strive to act like a lady - respectful, hard-working, and possessing solid character. Don't use your feminine traits unscrupulously. But understand that being a competent woman in the tech industry can inherently, by nature, make you stand out.


III. Never Stop Being a Girl


I feel the need to wrap this up with the following disclosure and that is: don't stop being a girl.

Just because we're in a mostly-male industry doesn't mean we can't be ourselves. I've never made a point of dousing my girly side. When I get to meet my Ektron peeps in person for the first time at the Ektron Synergy conference in May, I will be as well-versed and prepared in my craft as possible. But I will also be wearing my signature jewel-tone colors, my Wonder Woman belt, and echoing the halls with my (I'm told) wonderful and infectious laugh.

Sometimes our culture tries to sell the idea that two things have to be the same in order to be equally valued. (Case in point: Back in our mothers' day when ladies were dressing like guys at the office.) That's absurd. I'm female. I'm never going to be the same as a male and vice versa. And there's nothing wrong with that.

It's not about male and female. It's just about excelling at what you do (whatever your field); understanding what your personal challenges and fears are and how to combat them; and building solid character.

So go ahead, ladies! Be girly. Be confident. Be a lady - in a man's world!