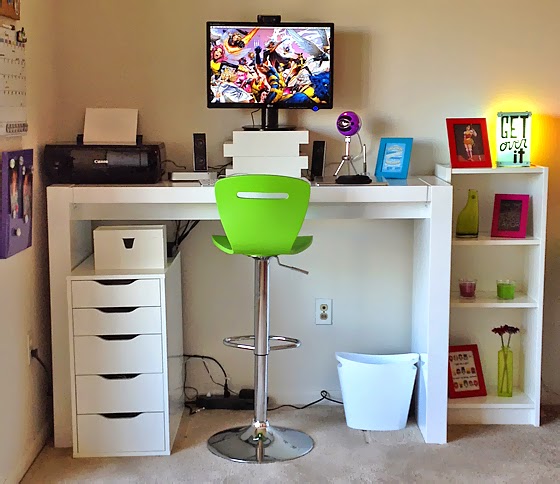 Standing desks are currently all the rage - and for legit reasons. Humans are simply not meant to sit all day. It messes with our metabolism, our spines, and even our sanity. (At least it does for me!)

After dealing with some recent back issues, I decided to hop on the standing desk train - at least as far as my home desk was concerned. However, standing desks are not cheap. Don't get me wrong - there are some nice options out there. But between the desk and delivery, you can easily spend $500-$600. Also, most include the ability to adjust the height, allowing you to switch between sitting and standing. I wasn't interested in that feature, however, so why pay for something I wouldn't use?

I scoured the Internet for do-it-yourself options but most of them were ugly. (Like, really ugly.) Or, in the case of the options I found on Kickstarter, expensive - even for something that sits atop a current desk.

So, in the end, I did what Jenn always does - I went my own way - and this was the result.


What you see includes:

Viola! For the price of an adjustable standing desk, not only did I go standing desk - I created an entire new workspace!

The first piece I purchased was the pub table. The height was perfect and the style was exactly what I wanted - modern, sleek, and sturdy. The four Lack shelves lift my monitor up an additional eight inches to the ergonomically-correct height. By off-setting them, I created an interesting and artsy focal point to the space. 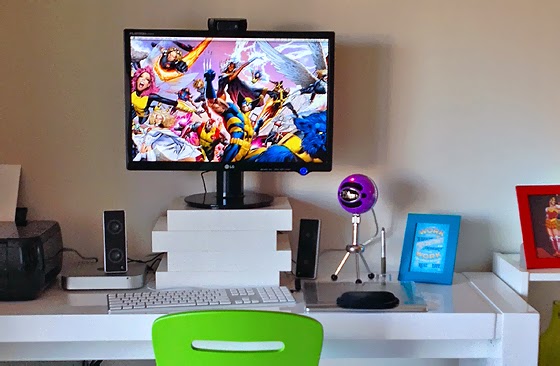 My old desk had one drawer and a single shelf. I had also been using a beat-up wooden filing cabinet as storage space. The Alex Drawer Unit replaced both, giving me plenty of storage while seamlessly matching the look of the pub table.

The Billy Bookcase was an impulse buy at the store. (I went into IKEA knowing exactly what I wanted, having measured and planned beforehand.) It turned out to be a great decision. For $24.99, I visually widened my workspace while also making it colorful. I used $1.79 candles, a vase, and various frames from IKEA. (The artwork, except for one piece which was a gift, I printed from Behance for free.)

Finally, I purchased a bar stool in the event I did want to sit - a situation I haven't run into yet, though. After sitting all day at the office, I'm more than happy to stand as I work in the evenings. I've found that I can stand up to three hours without issue. By then I tend to need a mental break anyway, so instead of sitting at my desk I just end up tackling some other activity altogether. Still, the chair completes the look of the workspace while adding another pop of color.

So what can you glean from all of this? (Especially if you've found this post a year from now when the above items are no longer available, and you're currently banging your head against your monitor in frustration?)

Simple: Think outside the box. Even other people's out-of-the-box boxes.

I needed a solution that fit my budget and worked for me - and nothing I found online did that. I knew I wanted to stand more than sit, so using a regular 'ole pub table (or something like it) made sense to me. A bar-height stool would allow me to sit on those rare occasions when I needed to do so.

The only other tricky part was raising my monitor, but a little creative thinking solved that. Each shelf is two inches tall, so it was just a matter of doing the math and determining how many I needed.

In the end, I'm happier with my space than if I had just sucked it up and ordered a standing desk from the latest Kickstarter campaign.

Necessity is the mother of invention - and creative workspace solutions!
Posted by Jenn at 2:02 PM